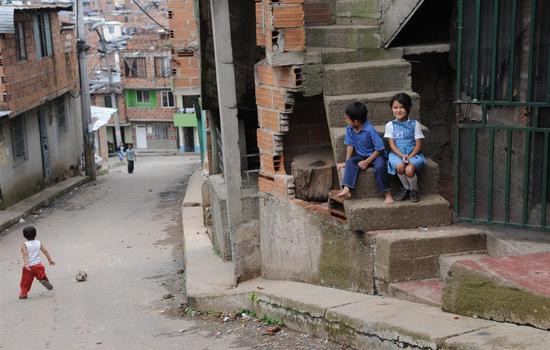 Children play football on a street while others sit nearby in Moravia, a poor neighbourhood in Medellín, capital of Antioquia Department.

In September 2009 in Colombia, the nations 44 million inhabitants continue to suffer from one of the highest income gaps between rich and poor in Latin America, more than 40 years of conflict, endemic social violence and rampant drug trafficking that affects all social strata and sustains the conflict. More than half a million Colombians have fled the country and another 3 million are internally displaced; 57 per cent of the displaced are children. Since 2005 Colombia has also had the highest number of casualties from landmines and other unexploded ordnance (UXO). In 2008, flooding in different parts of the country affected 1.2 million people and killed 76. Among other negative affects on children, education is frequently disrupted or does not adequately address their special needs and 12 per cent of children aged 5-17 years do not attend school. To respond, UNICEF, supported by more than US $1 million from the Government of the Netherlands, is working with the Ministry of Education, other UN agencies, civil society and private sector partners to implement an integrated Education in Emergencies strategy. The programme supports community and local government initiatives and institutions in emergency-affected departments. Initiatives identify vulnerable out-of-school children and help them return; support quality primary and secondary education that promotes gender equality, diversity, a culture of peace and respect for human rights; improve social and study skills and self-esteem among students, refer victims of abuse and sexual violence for psychosocial assistance; and encourage the participation of parents and other community members.