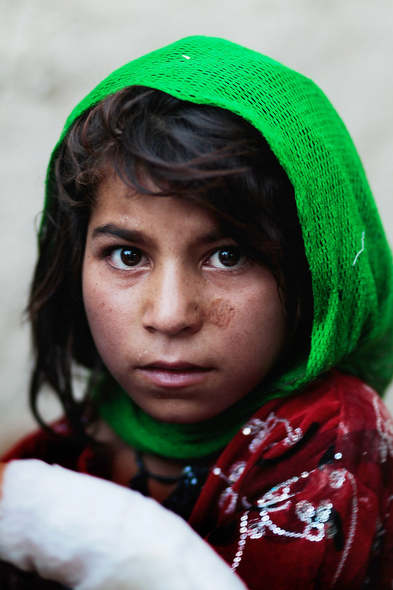 NOW RUZI, AFGHANISTAN – OCTOBER 12: (FRANCE OUT) Halawasha, an Afghan Pashtun girl, holds her badly burned young sister Shokria bandanged forearm after medics n the U.S. Army’s 101st Airborne Division wrapped her serious burns October 12, 2010 in the tiny village of Now Ruzi west of Kandahar, Afghanistan. The soldiers were on a routine patrol when they came across Shokria, who had third-degree burns over both forearms from a household accident with scalding milk five days ago; the only medical attention the wounds had were to be wrapped in dirty cloth. The wounds are life-threatening and Shokria can die of infection at any time. Army medics dressed the burns and began working with local Afghan military to have the girl driven to a hospital in nearby Kandahar. The 1st Battalion, 2nd Brigade of the 101st Airborne, the storied “Black Hearts” that won fame on D-Day and in other battles, are currently spread out in the Taliban-infused badlands west of Kandahar, attempting to sway the hearts and minds of the local populace even as Taliban militants continue their attacks in the restive area. (Photo by Chris Hondros/Getty Images)